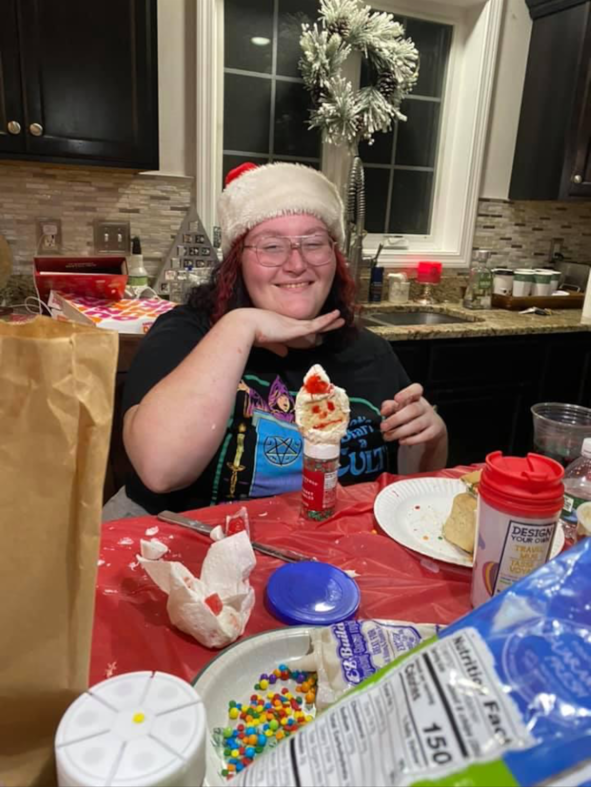 Stacey’s story is being told by her sister, Katie. Born in Derby, Connecticut, she resided in Ansonia, Connecticut for most of her life and graduated from Ansonia High School. Stacey relocated to Dartmouth in 2019. She was employed as a manager at Target in Dartmouth where she made many friends. Stacey lived with Katie and her 2 daughters: 9 and 13-years-old who just loved her so much and all their friends loved her. The kids all lovingly called her Sista Stace. She was like a big sister to all of them.

Stacey was only 21. She moved to MA from CT to live with my family as soon as she graduated high school. She was part of our family my 2 girls loved her. She worked at Amazon and then target she worked her way up to a manager position in six months. She worked 10 hour days, six days a week. In October Stacey got Covid she was sick for about a week but it was manageable.

December 17 she slept out at a friends house. They went out that night and had a great time. Saturday afternoon when she got home she said she was tired and wasn’t feeling well. So she slept all night Saturday all day Sunday. Monday morning I got a call from my husband I was already at the grocery store. He said she was coughing and sounded really bad. I called her and once I heard how bad she sounded I told her she needed to go to the emergency room. She resisted and said she wanted to just sleep it off but I insisted that she go. She got to the ER and didn’t even have a fever.

They took her back did bloodwork and a chest x-ray. Her oxygen was in the low 90s. Her chest x-ray showed Covid pneumonia. It was definitely Covid and definitely a new Infection. The doctor said it must have been a different strain than the first time for her to not have the antibodies. She got the Monoclonal antibodies and they didn’t help. The doctor was going to put her on ivermectin but by that point she needed oxygen. Ivermectin was no longer an option protocol was once oxygen is needed they don’t qualify for ivermectin. The doctors in the ED could not figure out why she was so sick. She shouldn’t have been that sick. She had no comorbidities besides her weight. They consulted with the pulmonologist and he could not understand why she was so sick and why her lungs were so damaged. They had no explanation I could tell how defeated they felt.

On Wednesday her doctor called and said she was not doing well at that point she was on CPAP and her oxygen was in the 80s. They needed to transfer her to ICU for BiPAP. I asked the ICU doctor for a high dose vitamin C and zinc. He said he’s never seen that help but it would not hurt either so he gave her those things on top of giving her the remdesivir. She did OK on the BiPAP or even texting me on Friday Christmas Eve saying that she was feeling so much better. She really thought she was getting better she just did not want to get her hopes up yet. During this time I was not allowed to see her. The protocol was a negative PCR test or a vaccination card. I could not get a PCR test anywhere.

My sister from Connecticut was able to come down and see her from behind the glass. So there was a lot of FaceTime calls and texting. Saturday she sounded a little more down we attributed that to it being Christmas and her being sad she wasn’t home. On the Sunday her messages started to sound a little jumbled Like she just writing words that she wasn’t meaning to say. Again we figured she was just tired. Her throat was so dry Everytime they tried to remove the mask to give her a drink her oxygen dropped. She was also starting to cough up a lot of the stuff that had been settled in her lungs. That made her nervous so they had her on high-dose Ativan to help calm her nerves.

The doctor began discussing ECMO We had asked several times to have her transferred to Boston. She was not stable enough to go and would have to be intubated to go. The doctor fought her a case for ECMO they did ECMO in Boston. She was denied they said she was not a candidate because of her weight. The doctor said at this point the only thing she had on her side was her age. Monday morning I spoke with the doctor and he thought the ventilator is some thing that would be happening soon. Her oxygen was in the low 80s and her co2 was high. I called back and spoke with the nurse and fought with them to let come see her.

They finally gave me 20 minutes and I was able to see Stacey for the first time. It was from behind the glass my sister just looked at me and cried the entire time. I tried to turn my head away so she couldn’t see me crying and I kept telling her that she was going to be OK. Her body was so tired and she just needed the rest. Within an hour of me leaving she was on the ventilator. She did it while on at the first few days they were proning her every night.

After a few days they didn’t even need to anymore. Her oxygen was in the high 90s even 100. She was heavily sedated they were even able to start weaning down her paralytics. They got the ventilator down to 55% then 45%. The doctor called me on Sunday, January 2. He said he was cautiously optimistic that she was going to make it. He really thought she had turned the Covid corner. As long as she remained stable they would start talking about taking the ventilator away later on the week.

We Finally felt like we could breathe. I had not even updated anyone we didn’t want to jinx things. We gave everybody the update that night. The next night on Monday her kidneys were starting to fail. She wasn’t producing any urine. Tuesday morning I got a call her heart almost stopped and they thought it was a good idea to come in. So my sister left from Connecticut and my husband and I headed to the hospital. By this time they had already put an arterial line in. Her body was too weak for dialysis so they had a different form of dialysis that was less harsh on her. The Doctor said her heart could literally stop at any moment.

Once my sister got there we headed back. We were not allowed to go in the room with her still. They said her viral load was so high and she was still so contagious. If we went in it could only be for a few minutes and we would have to immediately leave the hospital. We would not be allowed back and would have to quarantine. They scared us into not seeing our sister. We were able to get on the phone she had a speaker in her room. They had her on all of the cardiac medicine possible to resuscitate her.

They told us chest compressions would not do anything but cause more trauma to her body. So we made the unthinkable desicion for DNR. We told her how much we loved her. How strong she was how much she had fought and how much we would miss her. We told her it was OK to let go and we just loved her so much. We watched as her pulse went from 170,80,165,140 and as her blood pressure got lower and lower until she flatlined. My sister died alone behind glass She had no one there to hold her hand.

The hospital would not do an autopsy it would have cost us thousands of dollars. Why would they not want to do an autopsy to figure out how this could happen to a 21-year-old kid. The doctor said he did all he could they followed all the protocols and gave the remdesivir. I didn’t know how bad that drug is. These protocols have to change.